Although there have been many individual and small occurrences throughout history when soldiers have put aside their deadly patriotism, there is none more dramatic and famous than the unauthorized Christmas Truce of 1914.  This was the time during World War I when English and German soldiers came out of their trenches and became friends, had parties, exchanged gifts, and played football; all against orders, with some companies continuing through New Years Day.  Both sides were ultimately ordered back to their trenches to fight.  Oh, that those patriots could have continued to refuse to fight, the war may have ended in those early months of the war, on that first Christmas.  Better yet, if those who professed Christ would have followed the commands and teaching of the Lord Jesus, and the example of the Church for the first 300 years, the leaders would not have had an army to go to war in the first place.

For more information on the Biblical and early Christian position on non-resistance, we recommend the books the following books on the Polyventure Publications website Recommended Books page; 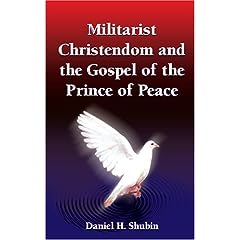